There is an interesting history connected to the creation and use of generators. In 1831 Michael Faraday made what would be the predecessor to our modern generator. The rotating disk in “Faraday’s disk” proved to all that mechanical energy could be converted to magnetic energy. Although his discovery was great, the magnetic energy was unstable. Still this discovery opened the floodgates to other scientists to make a usable, functioning generator.

The Dynamo generator was the first of its kind to be able to provide energy to companies and businesses that would need it. Its large size and inefficiency had it falling out of favor. Although it produced twenty-one hundred watts of power, it took 1400 RPM’s to produce it.

Generators like the Yamaha 4-Stroke has every modern attachment imaginable. There is a remote for easily switching the machine on and off. There is a gauge to tell you how much fuel you have used and how much you have yet to use. There is a feature that shuts off the generator if the oil runs too low. 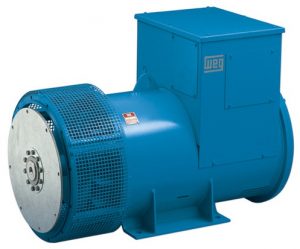 One of the complaints about generators is that though efficient, they are very noisy to operate and unattractive look at. In the 1800’s individuals were too excited about their new discovery to care about the noise that the machine put out.

It was all a fair exchange for generated energy. Today’s generators are practically noiseless energy machines. Part of the fun of this Yamaha generator is that it is very nice to look at. A snappy cobalt blue color beats the hulking metal machine generators of the past.