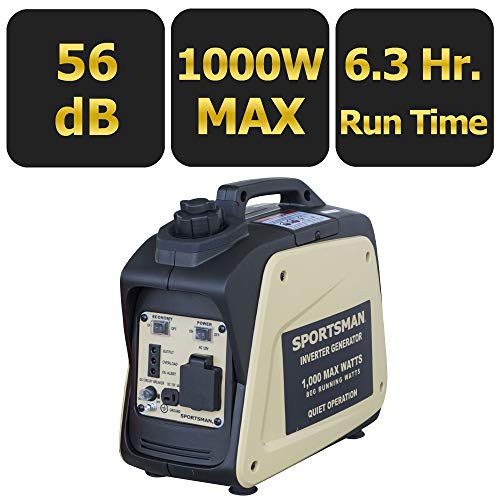 If you’re looking for a portable generator at a budget price, then you’ll likely run into trouble. There’s not a lot of choice for budget generators. The Sportsman 1000W is one of the best low-priced generators on the market.

With such a low price though, there’s bound to be the obvious question of whether or not the generator is even worth it. That said, the Sportsman 1000W packs a surprising punch for something so small.

The Sportsman 1000W sells for an average of a few hundred dollars, which is a fantastic deal no matter how you slice it. In terms of just price over performance the generator ranks a solid 5 stars. It has proven itself to be more than reliable enough for everyday use.

The generator is pretty light and offers good fuel efficiency and power output for the price and size. It’s going to have some drawbacks but it still offers enough in the performance and longevity department to make up for those shortcomings.

In terms of dependability and functionality, the Sportsman 1000W offers reliable efficient performance for small jobs. The “1000W” refers to the generator pumping out 1000 watts at the most, with an average running power of 800 watts. This makes the generator a good choice for refrigerators and air conditioners that need 800 watts to start but run on less power.

One nifty little feature is the safety feature that automatically shuts off the engine when it gets strained. This feature goes a long way to ensuring that the generator lasts for as long as possible. On top of this is a feature that shuts down the generator automatically when oil runs low. You can expect it to run for 6.3 hours on a full tank at a 50% load. The more things you have connected to the generator, the less time it’ll last.

The Sportsman 1000W is best used for powering small household appliances and power tools. Count on the Sportsman to be there for recreational activities and to provide power when camping or on vacation too. Don’t rely on it to keep your home going during a blackout though. It doesn’t have enough power for that.

While the Sportsman 1000W can’t really keep a house going, you can count on it to keep the batteries in a travel trailer charged. The generator can keep you going while off the grid and camping and can power a small electric heater. The Sportsman 1000W was designed more for recreational and outdoor use than anything else. It’s great for outdoor activities such as camping, fishing, or playing sports.

The Sportsman 1000W comes with a 40cc four-stroke engine. The 0.55 gallon fuel tank takes unleaded gasoline. You’d be amazed at what you can get out of just 55 ounces of gas though. One user claims to have used the generator for up to 5 hours with their TV, PS4, and two fans hooked up to it.

The generator is also surprisingly quiet and generates just 56 decibels of noise, putting it on par with the other two generators. Put the generator in economy mode or reduce the electrical load to get it running even quieter.

One thing that stands out about the Sportsman 1000W generator is just how light it is. The Sportsman weighs in at just under 25lbs, making it the lightest option. It doesn’t come with a cover, but it is made with a suitcase design. The design gives it plenty of protection against the elements even without a special cover.

In terms of accessories, the Sportsman comes with a 120V AC outlet and a 12V DC outlet to charge batteries. It also features a plug but doesn’t come with free engine oil. You’ll have to buy your own oil before you can use it.

The Sportsman 1000W also comes with a manual that covers basic maintenance instructions. Change the oil on a regular basis and use a fuel stabilizer when the generator is not in use. The generator is EPA and CARB compliant which means it can be used anywhere. It is covered by a one year warranty and should last you for much longer than that as long as it is taken care of and used properly.

The Sportsman 1000W was designed to offer a lot of power in a small package. This is something that it excels at quite well. The generator pumps out 1000 watts of power through 120V outlets with recoil start. The generator offers enough power to keep appliances and devices like computers, televisions, and tablets running. If you have LED lights you use at home or when camping then you can count on the generator to keep those going too.

Thanks to the sine wave energy used by the generator, the power is stable, clean, and reliable. It shouldn’t cause any problems with sensitive electronics and power surges shouldn’t be an issue. The generator pumps out enough power to be used for portable power at a job site or construction project. It also has enough power to run an air conditioner, which runs on an average of 450 watts.

How Much Noise Does the Sportsman 1000W Make?

The Sportsman 1000W is hardly the quietest generator on the market, but it still runs quieter than most. The generator pumps out around 56 decibels of noise when running by itself with no load. That’s about as loud as the average conversation or background noise in a restaurant.

The problem is that the amount of noise quickly builds when you start plugging things in. Even a quarter load is enough to get the generator going. On a full load, the generator is around as loud as a vacuum cleaner. Even then, it’s still quieter than other generators so you could do a lot worse.

As mentioned before, the Sportsman has a relatively small fuel tank of just 0.55 gallons. This should give you around 6 hours of use at a 50% load. How long the fuel lasts will depend on how much power you use. Given the size of the tank, you’ll find yourself refueling the generator a lot of you generally run high loads.

The Sportsman is also lacking in the fuel efficiency department. It’s not the worst, but it could be better. Make sure to use the economy mode feature if you want to get the most out of the generator and use it as long as possible.

The oil tank holds 10 ounces of oil. It’s recommended that you use SAE 10W30 oil for the best results. It’s also recommended that you don’t use a full tank of oil and instead use only around 7.5 ounces. Another problem with the oil is that you have to take the whole side panel off to replace the oil in the generator. It’s not difficult, but having to do it all the time gets frustrating.

Pros and Cons of the Sportsman 1000W Generator

If you’re looking for a generator but don’t have a huge budget to get one, then the Sportsman 1000W could be your best choice. If you don’t need too much power then it’ll get the job done just fine. With that said, it doesn’t have enough power to be a commercial generator or a backup generator at home with just 800 running watts and a peak of 1000 watts. The low power generation of the Sportsman means it might not even be effective for use in tailgating.

There are plenty of things it is good for though. It’s more than good enough for camping and outdoor activities. At the very least it should keep you going until you can afford something more substantial. The low price tag is what makes this generator so appealing, but don’t forget that you get what you pay for. If you need something more, you’ll have to pay for it. Even so, this is an excellent budget portable generator.

Any of these generators should get the job done when you need a portable power solution. Which generator is right for you depends on your budget and the actual job that you need to get done.

If you’re looking for something that will tide you over until you can afford something better, then look into the Sportsman 1000W. This generator is great for camping and simple recreational activities, but it won’t do you much good if you’re looking for backup power at home. It’s the cheapest of the three but also the weakest.

For something bigger and better, either the Energizer or the Briggs & Stratton will get the job done. The two generators are practically equal when it comes to their specs, so pick which one best suits your needs. Just know that you can’t go wrong no matter which one you go with.